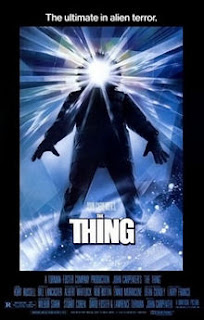 By now, everyone knows that remakes don't always work. There are those very rare exceptions, but the number is still small.

Most people know by now that John Carpenter is a devotee to Howard Hawks. (After all, Assault on Precinct 13 is a sci-fi take on Rio Bravo.) Carpenter's The Thing, although based on a different source, clearly had Hawks' The Thing from Another World as an influence. (Yes, I know Hawks wasn't the official director, but just go with it.)

I'm not big on gore, but Carpenter is fortunate enough to not overdo it. Okay, he does overdo it sometimes, but it has meaning to it. Saying I got nightmares from it is an understatement; I got nightmares for all eternity. As if Halloween didn't spook me out enough. Now Carpenter's my go-to source for something scary.

The Thing gets a good feel of paranoia. Think of it as Invasion of the Body Snatchers set in Antarctica. You don't know who's been taken over, so you're constantly on edge. You know how Brian De Palma kept making homages to Hitchcock? Carpenter did that with immense ease with both Halloween and The Thing.

My Rating: *****
Posted by MovieNut14 at 6:57:00 PM
Email ThisBlogThis!Share to TwitterShare to FacebookShare to Pinterest
Labels: 1980s, movies, reviews