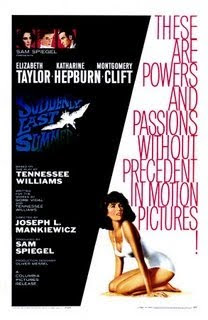 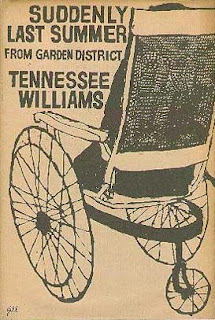 I've noticed from the adaptations of Tennessee Williams' plays that they are star-studded. From the ones I've seen (A Streetcar Named Desire, The Night of the Iguana, Cat on a Hot Tin Roof, Suddenly, Last Summer), that claim is true.

In the adaptation of Suddenly, Last Summer, it stars Elizabeth Taylor, Montgomery Clift and Katharine Hepburn. They act their roles well, but I thought that Hepburn was a little out of place.

The story of Suddenly, Last Summer is about Dr. Cuckrowicz being called upon by Violet Venable to perform a lobotomy on her niece Catherine Holly. Catherine knows disturbing details about the death of her cousin Sebastian, Violet's son. Cuckrowicz wants to know more about the scenario from Catherine before making his final decision.

There's a bit of an autobiographical feel to Suddenly, Last Summer. Williams had a sister who underwent a lobotomy by the urging of their parents. The lobotomy allegedly contributed to Williams' alcoholism and drug addiction. Another example of art imitating life.

Though it's not one of Williams' best, Suddenly, Last Summer is a very good play. The movie could've been improved as well, but again it was good.

What's worth checking out?: I'd go with the play.
Posted by MovieNut14 at 6:00:00 PM
Email ThisBlogThis!Share to TwitterShare to FacebookShare to Pinterest
Labels: book vs. movie, plays, reviews, writer: Tennessee Williams