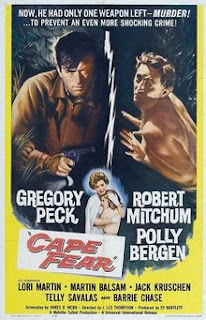 People always seek out revenge. Whether it's something not worth it or something big, everyone is seeking it.

Take Max Cady, played by Robert Mitchum, for an example. He holds a grudge against Gregory Peck's Sam Bowden, who served as a witness in a case that sent Cady to eight years in prison. Now out of prison, he wants to get even with Bowden.

We all know that Peck can play the good guy and Mitchum the bad guy, but with Cape Fear they add a little more to their typical casting. Mitchum's Cady is as diabolical as Harry Powell from The Night of the Hunter, a role which many argue is Mitchum's best work as an actor. But as Cady, we see him channel the depths of a sociopath's personality. Peck's Bowden shows the great lengths one man will go to protect his family.

Now some people may be more familiar with the Martin Scorsese-directed version of Cape Fear with Nick Nolte and Robert De Niro. But don't overlook this one. It has Peck and Mitchum in some of their best work. And yes, like Harry Powell, Max Cady is creepy as hell.

My Rating: ****1/2
Posted by MovieNut14 at 9:49:00 PM
Email ThisBlogThis!Share to TwitterShare to FacebookShare to Pinterest
Labels: 1960s, movies, reviews