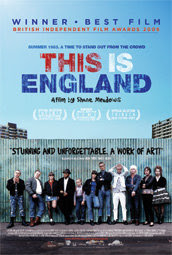 The opening credits of Shane Meadows' This Is England establishes both the time period and the general mood of the film. Within its beginning sequence, the film portrays itself as one of rebellion, simmering anger and discontent.

But scratch the surface of This Is England, and there's more to it. It depicts those trying to deviate from what society expects of them. After all, this was the 1980s; this was a generation brought up in an era of traditional values, counterculture and Watergate. They wanted to disassociate from the previous generation.

This Is England also depicts how easily corruptible youth can be. Shaun (an excellent Thomas Turgoose) falls into a small group of local skinheads led by Woody (Joseph Gilgun, also excellent). But when Combo (a terrifying Stephen Graham) re-enters the picture, things get more violent.

Though its premise makes the film seem more vicious, This Is England has a sense of heart to it as well. Woody's gang provides a sort of family to Shaun. And Combo provides a more toxic example, exposing the already fraying tensions the country is dealing with.

This Is England may be bleak by initial appearance but it blossoms into something else entirely. Meadows makes sure that his film is balanced on the very fine line of safe and wild. (Also just enough to make it tip briefly on either side.)

My Rating: ****1/2
Posted by MovieNut14 at 12:20:00 PM
Email ThisBlogThis!Share to TwitterShare to FacebookShare to Pinterest
Labels: 2000s, movies, reviews