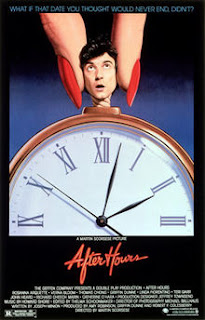 A number of Martin Scorsese's films tend to have New York City play as crucial a role as any of the characters. Taxi Driver, Mean Streets, Gangs of New York, Bringing Out the Dead...he wants the city he grew up in to be viewed as more than just the home to millions of people; it has a story of its own.

Scorsese's film After Hours is another title that brings out the city that never sleeps to further life. Set primarily in the SoHo district, it depicts how things are not always as they seem. (Not to mention this was a project Tim Burton was originally attached to. Just imagine how much more of a mind screw that would've been.)

After Hours is the kind of film that has Franz Kafka's influence all over it. From its surreal sense of humor to its quirky characters, it doesn't take long to establish itself as something different from Scorsese. (And he only made The King of Comedy two years prior.)

As mentioned earlier, After Hours also brings New York City to life. The many demons and vices of this dirty town come to light when the sun goes down. And as Scorsese's other NYC-set films show, the same can be applied to the characters.

After Hours is one of several entries in Scorsese's oeuvre to demonize the city he calls home. From supposed manic pixie dream girls to characters you could only find in a film from the 1980s, it's the kind of film that's a remnant of its time. And like The King of Comedy before it, it could only be made by Scorsese.