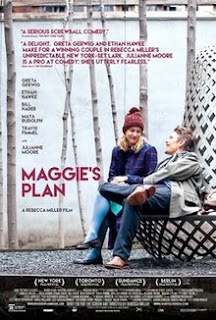 You know how sometimes the offspring of famous people share similar talents with their parents? The child of an actor might pursue the same roles that made their parent famous. Politics tend to span for more than one generation. And athletes might watch their kids follow their footsteps.

One recent example of this involves Rebecca Miller, the daughter of acclaimed playwright Arthur Miller. As her film The Ballad of Jack and Rose showed back in 2005, she was capable of creating dynamic characters like her father. But how well has she fared with her latest film Maggie's Plan?

In familiar territory for her (almost to the point of typecasting by now), Maggie's Plan stars Greta Gerwig as a woman who's gaining a sense of direction in her life. Much like her collaborations with Noah Baumbach, Gerwig adds a sense of screwball to her character (thankfully not to "manic pixie dream girl" levels). Though it's probably high time she gets an against type role.

Also in Maggie's Plan are Ethan Hawke (who's been on a roll so far this year), Julianne Moore (who should probably invest in a better dialect coach), Bill Hader, Maya Rudolph (who provide comic relief) and Travis Fimmel (who provides an innocent nature). Clearly Miller knew which actors to get.

Maggie's Plan is definite proof that Miller is her father's child. With the film's focused writing and multi-layered characters, it shows she learned a trick or two from her playwright father. Hopefully she'll keep up the good work.

My Rating: ****1/2
Posted by MovieNut14 at 12:38:00 PM
Email ThisBlogThis!Share to TwitterShare to FacebookShare to Pinterest
Labels: 2010s, directed by women, movies, reviews