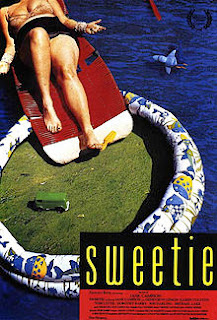 One's bond with their family is frequently a tumultuous one. Sometimes they get along with all their family members but one, sometimes the inverse. In short, it's rare to see a consistently healthy family dynamic.

Jane Campion's Sweetie is no exception. Focusing on the everyday life of a meek woman, it follows Kay (Karen Colston) as she deals with her insecurities and her mentally unstable sister Dawn (Genevieve Lemon). What is in store for these two women?

Much like Campion's later films, Sweetie focuses on how women are more complex than originally thought. Both Kay and Dawn as well as their mother aren't the perfect women the men in their lives think they are. Rule of thumb, male writers: women are just as layered as men.)

It isn't made entirely clear what precisely Dawn is inflicted with. Sometimes she displays erratic behavior often found in untreated bipolar disorder. Another scene has her devastated at being abandoned, a symptom of borderline personality disorder. Regardless of diagnosis, it's still interesting to see how Dawn ticks.

Though not as strong as some of her later works, Sweetie does show the potential bubbling within Campion. As she would do with The Piano four years later, she shows that women are more than the paper-thin depictions Hollywood usually churned out at the time. (It also shows how little progress has been made since its release.)