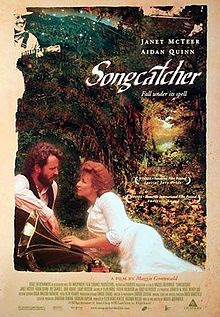 It becomes clear early on in Maggie Greenwald's Songcatcher that this won't be the usual fish out of water story. Set at the turn of the 20th century, it's the kind of film that only comes once in a blue moon. It doesn't need anything on a large scale; it just needs the right people for the jobs at hand.

And what a cast Greenwald got for Songcatcher! Starring in the film is Janet McTeer, frequently a welcoming face in the various projects she's in. Here, her Lily Penleric wants to defy the gender norms of her era, a task easier said than done in the eyes of some of her peers.

Being a musicologist, Lily's fascinated by the origin of folk songs. And during her trip to the Appalachian Mountains, she discovers many of these songs amongst its people. And what ensues has the frigid Lily warming up to these people and their way of life.

Like what Greenwald did with The Ballad of Little Jo seven years prior, Songcatcher is a depiction of Americana of days passed. She depicts a more simpler time before electricity became the norm but also when feminism wasn't. Oh, how the times have changed.

Songcatcher features the key and best qualities of a film. It lets the viewer bask in the same sense f discovery as Lily, an element many films tend to eschew. As is frequently the case with women-directed films, it's an often overlooked title. But hopefully more people will try to seek it out.

My Rating: ****1/2
Posted by MovieNut14 at 11:25:00 AM
Email ThisBlogThis!Share to TwitterShare to FacebookShare to Pinterest
Labels: 2000s, directed by women, movies, reviews