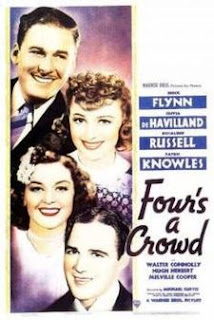 After three adventure-filled pictures, Warner Bros. decided to put their popular screen couple Errol Flynn and Olivia de Havilland in something lighter. In this instance, a comedy of the romantic screwball variety. Admittedly it's the lesser-known of their eight films but it doesn't warrant it as one that should be completely ignored.

Released the same year as The Adventures of Robin Hood, Michael Curtiz's Four's a Crowd has both Flynn and de Havilland in particular delivering their lines at a decidedly more frenzied pace than their earlier collaborations. (An expectation of comedy back then?) It's sort of a shame that neither of them indulged in the genre more often.

But Flynn and de Havilland aren't the only stars of Four's a Crowd. Also with them are Rosalind Russell (who would soon do The Women and His Girl Friday) and Patric Knowles (who was in the last two Flynn/de Havilland films). And both of them hold their own, Russell in particular.

This must've been an interesting undertaking for Curtiz. Prior to Four's a Crowd, he'd done the likes of gangster pictures and adventure flicks. (He had yet to make Casablanca and Mildred Pierce.) Comedy was something he didn't frequently dabble in (that fact becomes obvious in some scenes) though Curtiz did have luck within a few other scenes.

Being the lesser-known of the Flynn/de Havilland collaborations, it's understandable as to why Four's a Crowd isn't as prominent. But that shouldn't deter one from seeking it out. After all, it showed that should his swashbuckling days end abruptly, Flynn could've made a name for himself in a similar vein to Cary Grant.