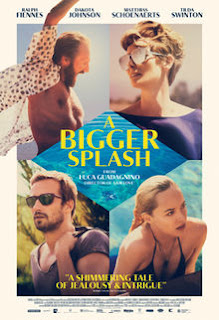 When one first glances at the trailer for Luca Guadagnino's A Bigger Splash, you'd expect it to be nothing more than a hot mess, the kind that's all style and no substance. (Guadagnino's previous film I Am Love has tones of this.) But as the film starts to unfold, it appears there's much more to it than it lets on.

That detail could also describe the characters of A Bigger Splash, Penelope (Dakota Johnson) in particular. That's not to say Marianne (Tilda Swinton), Paul (Matthias Schoenaerts) or Harry (Ralph Fiennes) are completely innocent either. They all have their flaws, they all have their stories to tell.

It was an interesting idea to have two well-established actors (Swinton and Fiennes) alongside two that are still making themselves known (Schoenaerts and Johnson). It shows the generation gap throughout A Bigger Splash, those who lived in the era of the Rolling Stones alongside those from the era of Nirvana.

A Bigger Splash also shows the contrast between old passions and young infatuations, the romances with a previous history and potential futures. Both of these are the kind that are stormy in nature, the ones that seldom quell for long periods of time. As Guadagnino also showed in I Am Love, passion has its consequences in the long run.

Though far from being the best film out there, A Bigger Splash will be on the viewer's mind once it's over. It examines the often ugly side of human behavior though not on the same level of greatness as other films of a similar nature. Still, it's worth a look for those curious.