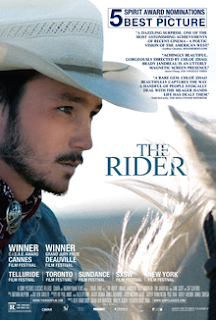 It's established early in Chloé Zhao's The Rider that Brady Blackburn (Brady Jandreau) is recovering from a debilitating rodeo accident. Because of his injuries, everyone around him figures that his days in the rodeo circuit are over. (One of his friends became permanently disabled from a similar accident.) But Brady is the stubborn type.

In many ways, The Rider is more of an ode to the westerns of decades passed. It focuses on the hardscrabble life of those in rustic locales, how the horse trade is how they eke out a living. Granted, things have changed since the days of John Wayne and Clint Eastwood but the point still stands.

Wonder why The Rider feels so authentic? That's because it's based on Jandreau's own life. (Hell, his own sister and father are alongside him.) Zhao had met him when she was making Songs My Brother Taught Me and what later happened to Jandreau compelled her to dramatize his story. And boy, does it work

Also of note in The Rider is the cinematography from Joshua James Richards. Gorgeously capturing the South Dakota Badlands, he has the outdoors play as much of a role as Jandreau himself. Very rarely does the scenery tell the story in a similar vein to the screenplay but Richards does just that.

The Rider is a very human story, one about those trying to achieve the American dream with varying success. Sometimes they get to the point where they want to be, other times life throws them a curveball (or several). Still, more often than not, they manage to find a way to make everything work for themselves. And that's where we find Brady as the film wears on.

My Rating: ****1/2
Posted by MovieNut14 at 9:18:00 AM
Email ThisBlogThis!Share to TwitterShare to FacebookShare to Pinterest
Labels: 2010s, directed by women, movies, reviews