Too Much, Too Soon 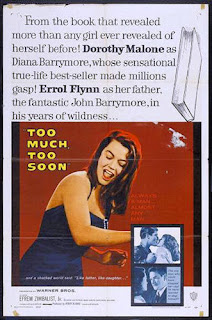 There's a part in Art Napoleon's Too Much, Too Soon where John Barrymore (Errol Flynn) proclaims to his daughter Diana (Dorothy Malone) that alcoholism isn't genetic. As anyone who's familiar with that family's stormy history (or from simple psychology), they know that's far from the actual truth. And boy, does Diana learn that the hard way.

Based on her memoir, Too Much, Too Soon chronicles Diana's relationship with her famous father and how she inherited his bad habits instead of his acting abilities. (Her mother mentions that she'll only get famous because of her surname only.) And don't expect anything sugarcoated.

Being a recent Oscar winner for Written on the Wind, Malone follows the likes of Ray Milland and Susan Hayward in depicting problem drinking at its ugliest. She shows how low Diana is willing to scrape by (including doing lousy impressions at a seedy dive bar), looking for something to fill that emptiness in her life. And knowing that the real Diana died just two years later, it adds a tragic twist to the title.

The same can be said for Flynn, who died the following year. Here he is playing his former drinking buddy, and you have to wonder how much of his performance was merely himself. Now a bloated shadow of his former self, you can see the regrets of throwing it all away in his features. The line between these two lives is blurred greatly.

While Malone and Flynn's performances are solid, the same can't be said for the rest of Too Much, Too Soon. It does get overly dramatic after an hour (probably expected for a biopic on a Barrymore) and the ending's flimsy. Still, they tried their best (but not very well).

My Rating: ***1/2
Posted by MovieNut14 at 12:27:00 PM
Email ThisBlogThis!Share to TwitterShare to FacebookShare to Pinterest
Labels: 1950s, movies, reviews