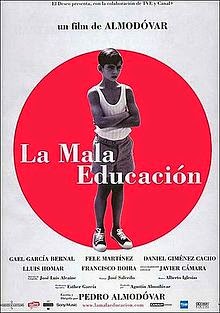 Lies, temptation and betrayal. These are the three things that make for any film noir. Then again, they could also be applied to any good drama. (Seriously, go watch Gone Girl if you don't think that's true.)

Pedro Almodovar often uses those elements for his films but none more so than Bad Education. A throwback to the noirs of days past, the film shows how even if you know someone, you don't really know them.

Like many of Almodovar's films, Bad Education features the occasional throwaway line that becomes crucial later on in the film. And with this being a tribute to film noirs, this Almodovar trademark becomes all the more relevant. It's a small detail, perhaps, but it's one worth mentioning.

And also like Almodovar's other work, Bad Education focuses on the powers of sex and cinema, To some, they're just casual hobbies. But to the characters of Bad Education, they have a form of healing. Strange forms of solace, perhaps, but they can work well to the right people.

Bad Education is definitely one of those films where the main theme is looks can be deceiving. Everyone wears a mask to those around them. It's only a matter of time before those masks begin to slip off.