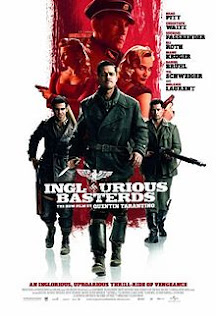 I've been a little iffy when it came to Quentin Tarantino. Blood-soaked scripts and foot fetishes aside, I think he's a good director. It's just I need to watch his movies in moderation.

I love how the trailers showed that Inglourious Basterds was going to be all about Brad Pitt. In reality, however, it's an ensemble piece. Each actor plays their role excellently. I personally like Christoph Waltz's work, where one review said this: "As Colonel Hans Landa, he runs the gamut of cinematic Nazi-ness, from the cold menace of Ralph Fiennes in Schindler's List to the high camp of Dick Shawn in The Producers."

Back to Tarantino for a moment. Again, I think he's a good director. However, I'm not entirely won over by him. Then again, I've only seen two of his movies. Maybe once I see a few more of his movies my opinion will change.

Man, Inglourious Basterds is one crazy movie. I mean, what do you expect if the title is purposely misspelled? It's a well-acted action movie, which, let's face it, is a rarity by today's standards.