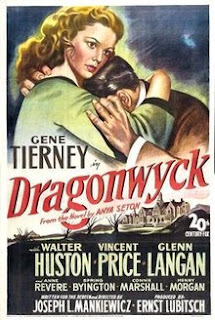 There's no denying that Joseph L. Mankiewicz boasted quite the illustrious career in Hollywood. Be it as a writer, producer, or director, he and brother Herman had stories to tell and succeeded in their endeavors. It's little wonder that the name "Mankiewicz" still means something in that town.

By the time Mankiewicz made his directing debut with Dragonwyck, he had been well-established for several years. (He got the gig because original director Ernst Lubitsch fell ill.) And boy, you'd never know this was his first time directing as you watch it. (Granted, he also co-wrote the script so already he had an idea of how the film flowed.)

Bearing elements reminiscent of Rebecca six years earlier, Dragonwyck is the kind of film that Hollywood -- barring Crimson Peak, perhaps -- doesn't make anymore. And that's a shame, really; it's a genre that has a little bit of everything (with more focus on some elements than others) and it's a solid deviation of the standard romance. (Because -- let's be honest -- romance itself is more complex than what Hollywood has us believe.)

Having more screentime together here than in their previous collaborations (Laura and Leave Her to Heaven), Gene Tierney and Vincent Price have excellent chemistry together. And Price -- after years of bit parts and supporting roles -- finally has a meaty role to sink his teeth into. (It was originally going to be Gregory Peck but he dropped out after Lubitsch did.) Makes you wonder had he gotten more roles like this throughout his career.

Dragonwyck is one of those few directorial debuts that works after all these years. With stunning cinematography by Arthur C. Miller and a chilling score from Arthur Newman, it just proves that Hollywood has been playing it safe for too long. Take more risks, Hollywood, like you did before the MPAA came to fruition.