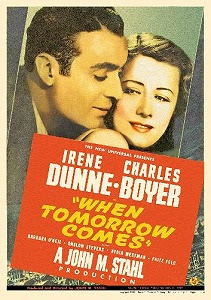 When waitress Helen Lawrence (Irene Dunne) meets Philip Chagal (Charles Boyer) in John M. Stahl's When Tomorrow Comes, she gets along with him very well. He in turn is instantly smitten. Their casual acquaintance blossoms into a romance but something (or someone) is holding them back...
Released the same year as Love Affair (another romantic melodrama starring Dunne and Boyer), When Tomorrow Comes isn't quite as romantic as its premise makes it out to be. Despite the best efforts of Dunne's besotted expressions and Boyer's purr of a French accent, it doesn't very much live up to its potential. And there's very much a reason for it.
That reason being how When Tomorrow Comes tries to somewhat justify Helen and Philip's ultimately adulterous liaison: his wife isn't of sound mind. In a half-baked attempt to rehash Jane Eyre of sorts, it only stigmatizes mental illness to explain away why Helen and Philip should be together at all (though Philip remains dutiful to his wife). It's not a great message to be shown in all honesty.
Anyway, being one of three Stahl films later remade by Douglas Sirk, it's a stark contrast to his more famous title Leave Her to Heaven. But at the same time, there's a similarity in that both films feature a possessive wife (though the later film has a much more malicious example). Still, to compare the two is an instance of apples and oranges.
When Tomorrow Comes isn't on par with the other weepies of '39 like Dark Victory and Wuthering Heights but the leads' shared charisma can only go so far. But hey: you got Stahl adapting a James M. Cain story...even though Cain would end up suing Universal.
My Rating: ***1/2
Posted by MovieNut14 at 11:57:00 AM
Email ThisBlogThis!Share to TwitterShare to FacebookShare to Pinterest
Labels: 1930s, movies, reviews