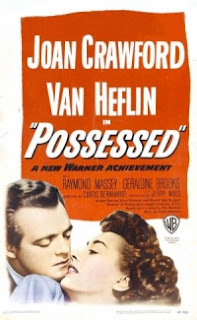 Curtis Bernhardt's Possessed opens with a woman wandering the streets of Los Angeles, searching for someone name David. Her behavior causes her to be hospitalized, and it's there she's identified as Louise Howell (Joan Crawford). But what's her story?

It turns out that "David" is David Sutton (Van Heflin), a former lover of Louise's who broke things off with her because she was too obsessed with him. Since she married a recent widower (and her former employer), things start to stabilize for once in Louise's world. But then David starts to show more interest in her stepdaughter...

Being made not long after her Oscar win for Mildred Pierce, it's clear as to why Crawford was chosen to star in Possessed (not to be confused with an earlier film of hers with the same title). And as she also showed previously with A Woman's Face, noir was where she excelled. (After all, all three of her Oscar-nominated performances were for roles in the genre.)

It's also worth mentioning that this was among several titles at the time that shined a light on the workings of the human mind. Like The Snake Pit the following year, it was a film that required immense research on the leading lady's part. And boy, does it pay off.

Possessed may be a lesser-seen work of Crawford's but it doesn't have to stay that way. It's as high-strung as her performance, something many imitators have tried to achieve (but only a handful have succeeded in). And if anything, it proves that Crawford was the face of noir. (Okay, next to Barbara Stanwyck.)

My Rating: ****1/2
Posted by MovieNut14 at 4:06:00 PM
Email ThisBlogThis!Share to TwitterShare to FacebookShare to Pinterest
Labels: 1940s, movies, reviews