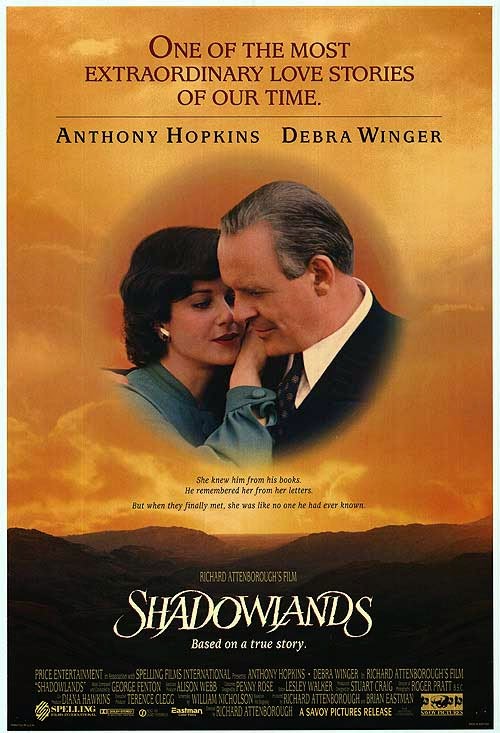 Richard Attenborough's Shadowlands is one of the many quiet films to come out of the United Kingdom during the 1990s. Yet for some reason, it isn't held in the same regard as Howards End or The Remains of the Day. It's hard to see why; it's a very well-realized biopic.

The film focuses on the relationship between British writer C.S. Lewis (Anthony Hopkins) and American poet Joy Gresham (Debra Winger). It highlights the early days of their courtship and how it met a tragic end. A familiar premise to some, maybe, but it can be told beautifully in the right hands.

Mich like Bright Star and The Invisible Woman in the following years, Shadowlands doesn't linger on the physical act between the famed writer and his mistress. It instead focuses more on the personal connections between the two. It's something that should be applied more to films of this nature.

And the performances are very good. Much like his work in The Remains of the Day, Hopkins delivers a quiet turn as Lewis, one of silent longing and affection. Winger meanwhile provides a nice foil to Hopkins' role, one that's more outspoken than his more reserved personality. Yet through subtle changes, both become more comfortable around each other.

Shadowlands is easily one of the lesser-known biopics of the last thirty years, and it's unfortunate that not many people have seen it. Thanks to the work from Attenborough, Hopkins and Winger, it's a deeply realized film.

My Rating: ****1/2
Posted by MovieNut14 at 10:42:00 AM
Email ThisBlogThis!Share to TwitterShare to FacebookShare to Pinterest
Labels: 1990s, director: Richard Attenborough, movies, reviews