Yesterday, Andrew Parker, a film blogger I follow on Twitter, posted a suicide note on his blog. Thankfully because of the concern of many other people that follow him on Twitter, he didn't go through with his plan. I added my two cents to the situation: 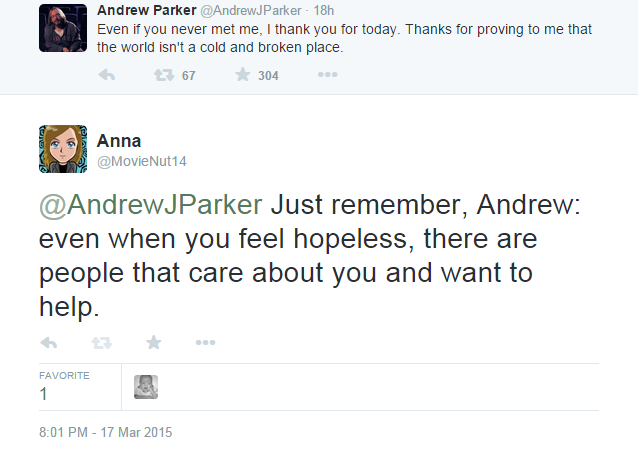 My mind was racing afterwards because I understand what Andrew was going through. For some time, I've been wondering what's the damn point of living. I thought I was an insignificant nobody amid billions of people, and no one would care that I was gone. But several things over the last few years made my frame of thinking change drastically.

As some of you may know, my father died suddenly two years ago. For some time afterwards, I didn't know how he met his fate but my mother told me a few months after the memorial service. She told me that my father had Hepatitis C (something I didn't know of before then) and then she told me how he died.

At first I was shocked that my father would do such a thing. And then I began to resent him for doing such a cowardly act. Why would he do that rather than go through treatment? To this day, I still don't know why he did nor how he did it. (It still feels like an inappropriate thing to ask my mother out of the blue.)

It was also because of my father's death that I realized suicide wasn't the answer. Seeing firsthand how my mother grieved at the loss of her husband of thirty years, I knew my mother would have had a similar reaction should her second child die the same way as her children's father.

For about a year after my father's death, I kept quiet about my depression and suicidal thoughts. I tried to think as to why I should stay around. I flunked out of college after one year, my siblings were thriving in their own lives, and I was living at home unemployed. Then I started thinking about the things I haven't done yet: the books I haven't read, the films I haven't seen, the people I haven't met...these are what convinced me to stick around.

Fast forward to the evening of August 11, 2014, three days after what would have been my father's fifty-eighth birthday. I was on Twitter when I found out of Robin Williams' suicide. As with many people, the shock of what had happened shook me to the core. It was also because of this that I realized that I should seek professional help. (I began seeing a psychologist the following month.)

Now after six months of seeing a psychologist and taking anti-depressants, I can say that I feel different emotionally than I did this time last year. But even then, I still feel like I'm not important. However, I've met some really lovely people on Twitter and I thank them for being so nice for me.

Thank you so much.
Posted by MovieNut14 at 4:24:00 PM
Email ThisBlogThis!Share to TwitterShare to FacebookShare to Pinterest
Labels: about me