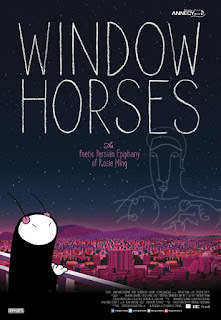 How does animation manage to stay fresh? After years of those with songs that get stuck in your head for weeks afterwards, recycled characters, and sometimes similar animation styles, it's practically a miracle that the genre as a whole hasn't collapsed yet. But then again, the solution is simple: originality is crucial.

Ann Marie Fleming's Window Horses follows Rosie Ming (Sandra Oh), an aspiring Canadian poet. After her collection of poems is published, she gets invited to perform at a poetry festival in Iran. While she's there, she explores the country's rich history and tries to find answers about her father, who abandoned her family when she was young.

Window Horses goes beyond the mysteries of Rosie's past and explores the history of Middle Eastern poetry. Through different styles of animation, the film depicts how the art of the written word has an affect on those who encounter it, (Sometimes for the better, sometimes for the worse.)

Also displayed in Window Horses is the clash of different cultures. Upon arriving in Iran, Rosie dons a chador rather than the traditional hijab. (Several people remark on it.) And one poem performed at the festival is met with disgust because its metaphor doesn't mesh with Iranian beliefs. Rather than being a punchline, these instances are treated as a chance for learning.

Window Horses provides a fascinating story to watch unfold. It's more than a tale of one's self-discovery; it's about their potential future as well. And Fleming tells a story that's as lively as its various animation styles. This isn't one that should be brushed off, not by a long shot.

My Rating: *****
Posted by MovieNut14 at 8:35:00 PM
Email ThisBlogThis!Share to TwitterShare to FacebookShare to Pinterest
Labels: 2010s, directed by women, movies, reviews