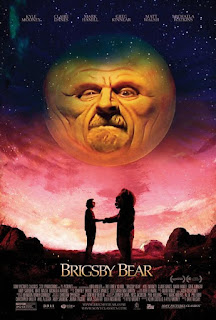 It seems early on in Dave McCary's Brigsby Bear that James (Kyle Mooney) leads a rather unassuming if occasionally strange life. He lives in his own world while under the roof of his parents (Mark Hamill and Jane Adams), much of his time and energy going towards watching a children's show called Brigsby Bear Adventures. One tiny problem: everything he knows is a lie.

Turns out James was kidnapped from the hospital after he was born. Once he's reunited with his actual family, he finds it hard to adjust to the fact Brigsby Bear Adventures was made for him alone. His solution? Conclude the story by making a movie.

Admittedly such a premise sounds odd once you think about it but McCary provides something that Hollywood usually doesn't get all that often nowadays: originality. Because, honestly, one can stand the re-tread for only so long.

It's not outright stated in Brigsby Bear but James has some traits that would imply he's on the autistic spectrum. He's persistently focused on one thing (in this case, making the Brigsby Bear Adventures movie), he has difficulty connecting to the outside world and becomes overly excited when he's talking about things he's passionate about. It could be waved off as the result of his sheltered upbringing but it's something to keep in mind.

Brigsby Bear is a welcome original entry amid a slew of sequels and what have you. This is something Hollywood should be embracing more with their own works. Not everyone yearns to see the follow-up; many times the lone feature is more than enough. (Oh, and Hamill is a delight here.)

My Rating: ****
Posted by MovieNut14 at 9:50:00 AM
Email ThisBlogThis!Share to TwitterShare to FacebookShare to Pinterest
Labels: 2010s, movies, reviews