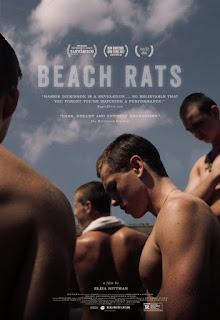 Last year, Moonlight provided a portrait of how the perception of masculinity can be damaging to boys when they're subjected to it. They're expected to not openly display what they're feeling, maintain a tough demeanor, and always prove themselves as the alpha male. Of course, such thinking is not without its consequences.

Eliza Hittman's Beach Rats is the latest to focus on this. Frankie (Harris Dickinson) spends his days hanging out with his friends, finding ways to get high, and roaming the streets of Brooklyn. By night, however, he's in the sanctuary of his home cruising online.

It's clear Frankie has some doubts over his own identity. (He even has a girlfriend for a short while.) He feels like he needs to act and look like the average street smart teen. But as we saw with Chiron in Moonlight, that doesn't sum up one's entire personality. Just because you behave that way doesn't mean you are that way.

But to compare Beach Rats to Moonlight is unfair on both films' parts as it only generalizes their premises. With Hittman's film, she explores how being gay around certain people can be, especially if they think everyone falls under the many stereotypes directed towards the LGBT+ community.

Beach Rats chronicles the self-doubt those confronting their sexuality face in a more exposed way previous entries have tried to depict. The figurative and literal nakedness of Frankie throughout the film shows how vulnerable he really is despite his tough guy persona; he wants to be accepted for who he truly is.

My Rating: *****
Posted by MovieNut14 at 10:25:00 AM
Email ThisBlogThis!Share to TwitterShare to FacebookShare to Pinterest
Labels: 2010s, directed by women, movies, reviews