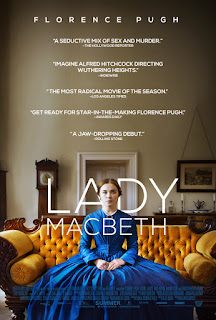 Within the opening scene of William Oldroyd's Lady Macbeth, we get a faint sense of what to expect from Katherine (Florence Pugh). She seems rather disconnected during her wedding ceremony, indicating she's most definitely not marrying for love. (And the abuse she gets from her husband and father-in-law further solidifies that.)

It's once she gets the manor to herself that Katherine's true colors begin to surface. Gone is the passive demeanor she puts on for her husband and father-in-law; now in its place is a much more dominant personality, especially when she takes servant Sebastian (Cosmo Jarvis) to her martial bed. (Certainly puts the title into better context.)

What makes Lady Macbeth stand out from other costume dramas with female leads is how brazen Katherine becomes. After some time, she doesn't care who knows of her affair with Sebastian nor what they think of it. Is this what she's really like or is this what happens once she gets that taste of control?

And there's no denying that Lady Macbeth is a star-making turn for Pugh. Between her demure expression and her icy stare, her Katherine shows potential in the actress doing similar roles. (Because, honestly, a woman is much more multi-faceted than what male writers tend to depict them as.)

Lady Macbeth is as wicked as the title implies. Don't expect the genteel nature found in the work of Jane Austen but rather the tone of her commentaries from them. In fact, a line from William Shakespeare's own quill could best sum up Katherine: "Look like the innocent flower, but be the serpent under it."

My Rating: ****1/2
Posted by MovieNut14 at 9:53:00 AM
Email ThisBlogThis!Share to TwitterShare to FacebookShare to Pinterest
Labels: 2010s, movies, reviews