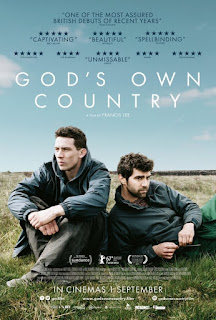 Johnny Saxby (Josh O'Connor) of Francis Lee's God's Own Country seems content if sometimes irritated with his uneventful life in Yorkshire. He helps out on his family's farm during the day, gets trashed at the pub at night, and squeezes in the occasional hookup here and there. It's when Gheorghe (Alec Secareanu) enters the picture that things start to change for Johnny.

By no means is God's Own Country the first film to follow such a premise, regardless of the sexuality on display. But what Lee does with his debut is he captures an awakening for Johnny. He's so accustomed to making himself numb, the thought of something meaningful in his life practically scares him.

There are similarities to Brokeback Mountain in God's Own Country, the most telling being the first sexual encounter between Johnny and Gheorghe. (In fact, that scene and several later ones practically parallel Ang Lee's film.) But to compare the two films merely reduces the worth of both works; they need to be appreciated individually.

While Lee shows immense promise with his career, the same can most definitely be said for O'Connor as well. The actor -- a relative newcomer to the profession -- depict's Johnny's frustrations towards his dull routine. (It's once Gheorghe becomes a part of his life that Johnny becomes more open emotionally.) Safe to say we'll be seeing O'Connor more in the coming years.

God's Own Country is a deeply intimate story, something not often explored in similar works (straight, gay or otherwise). Usually lust is mistaken for romance but Lee makes sure not to make the blunder others have made before. And the result is one that's essential viewing.

My Rating: *****
Posted by MovieNut14 at 10:01:00 AM
Email ThisBlogThis!Share to TwitterShare to FacebookShare to Pinterest
Labels: 2010s, movies, reviews