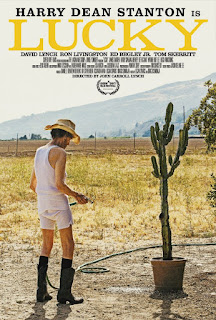 Mortality: the very thing most of us don't want to face. More often than not, we only start thinking about death once we've had a close brush with it. It's simply something we can't escape.

That's what the titular character (Harry Dean Stanton) experiences in John Carroll Lynch's Lucky after he falls in his house. Before that incident, he lives a rather nondescript life in a small town. He has his usual routines for his day, nothing completely out of the ordinary. But now he starts re-examining his life.

Stanton has been in Hollywood for decades now, having the kind of presence that's of the welcoming variety. Whether it's a supporting role or something on a smaller scale, he always delivers. And as he shows here, he has no trouble being the one in charge.

And since Stanton is the star and Lynch the director, it seems almost fitting that a litany of character actors round out Lucky. Each of the side characters have their own personalities, some of them mirroring their actors' traits. (The most telling one is with David Lynch's.) But as stated earlier, this is Stanton's show.

Lucky continues to prove that Stanton is a valuable performer. Here's someone who's been a regular presence for decades it's almost impossible to think of a film that wasn't improved by him being in it. There's nobody else like him, and there never will be either; he is simply one of a kind.

My Rating: ****1/2
Posted by MovieNut14 at 8:46:00 PM
Email ThisBlogThis!Share to TwitterShare to FacebookShare to Pinterest
Labels: 2010s, movies, reviews