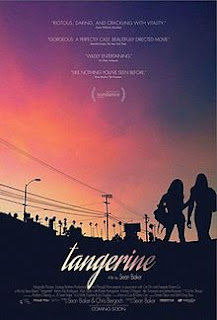 Sometimes you don't need big-name stars or an overly complex plot to make a compelling film. Many times all that's needed are the right people for the job. Sometimes it works, other times it doesn't.

In regards with Sean Baker's Tangerine, it thankfully falls into the former category. Yes, its premise is a familiar one (a woman finds out her boyfriend's been unfaithful) but that's not what makes Tangerine stand out. What makes the film stand out is its two stars.

Kitana Kiki Rodriguez and Mya Taylor, two trans actresses with no prior experience in Hollywood, show immense promise because of their work in Tangerine. As is sometimes the case with various acting debuts, it's obvious (sometimes painfully so) that the actor is a newcomer. That's not the case with either Rodriguez and Taylor.

It's also worth mentioning that Rodriguez and Taylor's involvement in Tangerine could be the next step in Hollywood's progression. Recently television has become more progressive when it comes to trans characters (read: having them played by trans actors and actresses). Will this open more doors for other aspiring trans actors?

Tangerine is a fascinating watch. It doesn't resort to cheap stereotypes to further the story. It just relies on that stellar script. Hopefully we'll be seeing more of Baker, Rodriguez and Taylor over the coming years. (Oh, and that last scene is close to perfection.)


My Rating: *****
Posted by MovieNut14 at 10:26:00 PM
Email ThisBlogThis!Share to TwitterShare to FacebookShare to Pinterest
Labels: 2010s, movies, reviews