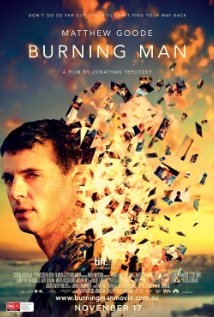 It's established early on in Jonathan Teplitzky's Burning Man that Tom (Matthew Goode) is living a chaotic life. He's a man with a stormy attitude, an unstable family life, and everything else about him is falling to pieces. As the film wears on, we see why Tom's life is the way it is.

Like 21 Grams the previous decade, Burning Man is told through a non-linear narrative. We see in fragments Tom's life before and after it started to fall apart. It's a storyline frequently told throughout fiction, one that only a few choice names can do well.

Like his follow-up film The Railway Man, Teplitzky shows how the events of one's past can linger in the present. Granted, what Tom went through is nothing compared to Eric Lomax's ordeal but what Tom endured can be just as traumatic. (Life can be cruel sometimes.)

A main theme throughout Burning Man is the slow path to recovery, something that we'll encounter at some point in our lifetime. Life in of itself  is far from ideal but that's something we have to accept. We may feel as though the pain will never disappear but sometimes all it takes is that one person to help you end that dark chapter and start anew. (Sometimes that person can be you yourself.)

Burning Man is good but nothing too groundbreaking. Goode continues to prove that he's a vastly underrated (and underused) actor. (Then again, Stoker also proved that a mere two years later.) That said, Burning Man is worth a look.

My Rating: ****
Posted by MovieNut14 at 10:32:00 PM
Email ThisBlogThis!Share to TwitterShare to FacebookShare to Pinterest
Labels: 2010s, movies, reviews