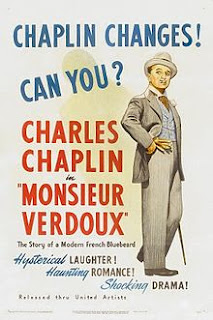 When we're first introduced to the titular character of Charlie Chaplin's Monsieur Verdoux, it's clear that he's a far cry from Chaplin's famous Tramp character. Yes, he does do a number of pratfalls and double takes normally found in Chaplin's silent films but it's certainly a new role for the comedian. Obviously so since Henri Verdoux is based on a real-life serial killer.

As if that couldn't tarnish Chaplin's previous image enough, Monsieur Verdoux was released when his career was beginning to dwindle. The was after his paternity suit, which put a sizable dent on his public image. Then to immediately follow it up with a film like Monsieur Verdoux? It's a miracle his career didn't end right then and there.

Much like The Great Dictator several years earlier, Monsieur Verdoux came under scrutiny because Chaplin expressed some of his political views in the film. After all, both films were released during a time in history where certain beliefs could ruin one's personal life. Chaplin was no exception. (The same year Monsieur Verdoux was released, Chaplin was subpoenaed to appear before the House of Un-American Activities Committee. And just five years later, he was denied re-entry into the United States.)

Another noticeable difference between the Tramp and Henri Verdoux is how they view and treat women. The Tramp practically worships any woman he comes across; Verdoux meanwhile has an almost misogynistic nature to him. No wonder Monsieur Verdoux wasn't so well-received upon its release.

That said, however, all of this information doesn't reduce Monsieur Verdoux to an unwatchable dreck. It's a nice departure from Chaplin's more optimistic films. It would be some time before his best film Limelight would be released but one has to wonder: what would his career during that time be like had Hollywood not kicked him out?