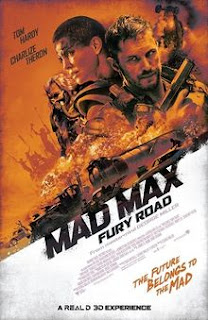 When you watch the trailer for George Miller's Mad Max: Fury Road, you figure it's nothing more than an overblown reboot of his earlier film, one chock full of adrenaline and massive explosions. But what about the film itself? Thankfully there's so much more to it.

"Like what?" you might be asking. Well, you know how films of this nature tend to be brimming with testosterone and toxic masculinity? Yes, the film does feature the latter in copious amounts but thankfully it's only reduced to the antagonists. (Surely this would've been a thoroughly obnoxious film to watch had it been all of the male characters.)

And though his name is in the title, Mad Max: Fury Road isn't just about Max Rockantansky (a grumbly Tom Hardy). No, this film shows that this desolate wasteland isn't just a man's world. There are women out here that know how to kick ass and take names.

And one such woman is Imperator Furiosa (Charlize Theron). Frequently we're treated to various female characters who can hold their own alongside their male co-stars when it comes to kicking ass. Annoyingly they tend to get reduced to romantic interests for said male co-stars. (*cough* Black Widow *cough*) Miraculously, that doesn't happen to Furiosa. (Thank you, Miller, for that.)

Mad Max: Fury Road is, simply put, friggin' awesome but the hype surrounding it is somewhat overselling the film. Yes, it has well-developed female characters. Yes, it has well-executed practical effects. But overall, it's another action film that has fallen victim to the Hollywood hype machine. (Bear in mind this is the critique of someone who much prefers more subdued works.)