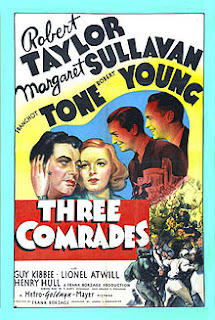 In the opening moments of Frank Borzage's Three Comrades, soldiers Erich Lohkamp (Robert Taylor), Otto Koster (Franchot Tone) and Gottfried Lenz (Robert Young) celebrate the end of the war over drinks and musings. They wonder what their futures hold for them, hoping that their fates have a shining light rather than a fading one.

A few years pass. The war is still felt in the three men, but they go on with their lives. Enter Patricia Hollmann (Magaret Sullavan), a society girl. Erich takes a shine to her and after some time, they get married. But their happy union is a doomed one.

The film is based on a novel by Erich Maria Remarque (apparently the same one that provided loose basis for The Deer Hunter as well) and its script was co-written by F. Scott Fitzgerald. For some reason, the script completely ditched the political message of the novel and focused more on the love story. Maybe MGM just wanted a nice romance film.

In a similar vein to the word "Mafia" in The Godfather thirty-four years later, the word "Nazi" or the country where the film is set (Germany) is never uttered at any point in Three Comrades. This was released only a year before Germany invaded Poland, but maybe MGM did this to ensure they weren't sympathizers of Germany. Who knows?

That doesn't make Three Comrades a bad film. Not in the least bit. The actors, Taylor and Sullavan especially, are very good. And I now desire to see more of Borzage's work.

My Rating: ****1/2
Posted by MovieNut14 at 10:46:00 PM
Email ThisBlogThis!Share to TwitterShare to FacebookShare to Pinterest
Labels: 1930s, movies, reviews