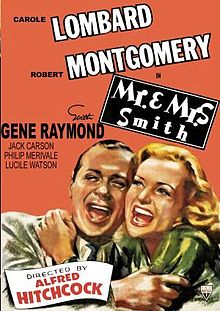 Back in the 1940s, the essential comedy directors of the era included Howard Hawks, Billy Wilder and Preston Sturges. Anyone else who tried to top them failed in doing so.

1941 saw the releases of Sturges' The Lady Eve and Sullivan's Travels, and Hawks' Ball of Fire (written by Wilder). It also saw the release of an unusual entry to comedy film called Mr. and Mrs. Smith. What's so odd about a film about a quarreling couple? Simple: it's directed by Alfred Hitchcock, the Master of Suspense himself.

Don't get me wrong. Hitchcock could get a lot of funny lines in his films like North by Northwest and Rear Window. It's just any film of his is better with a nice murder or a little bloodshed. (Well, technically there's a little blood spilled, but it's only from a nosebleed.) Hitchcock wasn't kidding about this little musing: "I am a typed director. If I made Cinderella, the audience would immediately be looking for a body in the coach."

I did like the performances from Robert Montgomery and Carole Lombard, both I was familiar with beforehand but more so with the latter. Both were very good at comedy, no denying that. This film is proof. Each exchange between them just radiates with their skill of comedic timing.

Mr. and Mrs. Smith is amusing, though it's hard to shake the fact that Hitchcock directed it. I mean, I like Hitchcock, but this seems more like a film suited for Hawks. Just saying.