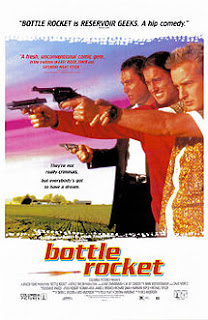 At some point in the last decade or so, Wes Anderson was dubbed the next Martin Scorsese. But this wasn't a musing by a critic, oh no. It was said by Scorsese himself.

Anderson's debut Bottle Rocket shows the very style that would make him recognizable among his peers. Yeah, that particular style isn't favored by many, but I personally like it. (Hey, quirky is good at times.)

Like several of Anderson's later films, Bottle Rocket has brothers Owen and Luke Wilson among its cast. It's always the cast that is key for a Wes Anderson film. (Hey, the man restarted Bill Murray's career.) Anyway, in regards to the cast of Bottle Rocket, my favorite performance was from James Caan, who basically played an older Sonny Corleone. (You know, if he actually survived.)

I like Anderson's way of filming though it gets a tad too zany at some points. Sure, it's entertaining but he gets a little too crazy at times. (This is why I prefer Fantastic Mr. Fox more because the rules of normal life don't apply to animation.)

Still, I really liked Bottle Rocket. It's pretty much what Reservoir Dogs would be if it amped up the comedy (and wasn't so violent and sweary). Those that like Anderson will be in for a treat.