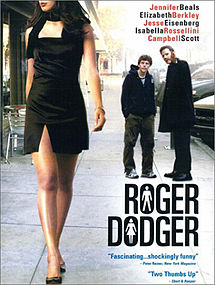 One can only imagine what goes on in the mind of Roger Swanson (Campbell Scott), the title character of Dylan Kidd's Roger Dodger. He speaks with an air of grandiose, but the words he utters sound more like they're from the mouth of an immature teenager rather than a man in his forties. Essentially smarm incarnate.

There's no denying that Roger is a chauvinistic bastard. He views women as objects, and is constantly thinking of new ways to charm them. The women he talks up clearly see right through him, but he doesn't care. (When asked how often a woman goes home with him, Roger hesitantly replies, "Every night." Response: "Bullshit.")

Enter Nick (a pre-everything Jesse Eisenberg), Roger's nephew. Nick has something Roger clearly doesn't have: a conscience. Roger of course overlooks that and tries to teach Nick the tricks of the trade, but Nick has no real desire to learn them. Like that's going to stop Roger.

In the wrong hands, the film could have fallen apart after the opening scene. Instead, Kidd ensures that every scene works, and they do. He also makes sure that every line has the effect that's desired, and they do. You gotta love a script that has bite.

Roger Dodger is vastly underrated, and it really shouldn't be. All of the actors play their parts very well, especially Scott (who delivers each line with comedic snarl) and Eisenberg (who displays a neurotic vulnerability). Though in all honesty, if I encountered someone like Roger and he talked to me the way he does, he'd get a drink in his face.

My Rating: ****1/2
Posted by MovieNut14 at 11:46:00 AM
Email ThisBlogThis!Share to TwitterShare to FacebookShare to Pinterest
Labels: 2000s, movies, reviews