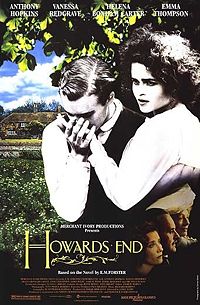 As I've stated a number of times before, most period pieces tend to bore me. I think it's because the frequent topic of the social class war that made me express a disinterest. However, those that veer away from the subject manage to catch my eye.

This is the case with James Ivory's Howards End. Sure, the social class war is acknowledged but never overemphasized. If it weren't for the presentation of the characters and the flow of the script, I probably wouldn't have liked it as much.

Speaking of the script, it just works. Rather than feeling stuffy and pretentious (sorry, Andrew), it feels as though it could be applied to modern day society. (Yes, I know it's based on a book. No, I haven't read it.)

The actors are just divine. They all play their roles wonderfully. Of them, my favorites were Emma Thompson, Anthony Hopkins and Helena Bonham Carter, all completely different from the other.

Man, that was a very good film. It has the right balance of elegance and posh, and doesn't make it appear too British. (Yeah, I can't believe I said that last bit either.) To sum things up, I very much enjoyed Howards End. (Happy, Andrew?)