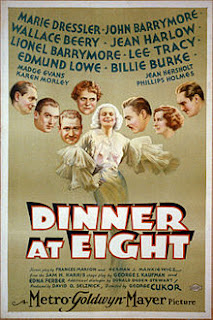 Nowadays a star-studded cast is all too common for any film. Back in the early years of Hollywood however, it was a little unusual. Having more than two or three recognizable stars in one film back then was a bold move considering the egos of some of those stars.

In 1933, George Cukor made Dinner at Eight. The stars include Marie Dressler, John Barrymore, Jean Harlow, Wallace Beery, Lionel Barrymore and Billie Burke. (Take note that the three male stars mentioned were also in Grand Hotel the previous year.) They were some of the biggest stars back then, so this was a treat for moviegoers back then.

I love all of the actors, especially Burke trying not to burst as everything goes wrong, and Harlow and Beery swapping snappy remarks. But I must highlight John Barrymore's performance. In the matter of a few scenes, he goes from a confidant actor to a man clinging to the tattered shreds of his career. The haunting aspect is how much of the role mirrored Barrymore's own career both present and inevitable future.

As well as the acting, the dialogue is just to die for. Each line is just very witty, especially the ones coming out of Dressler's mouth. But after seeing films like The Women and The Philadelphia Story, what else can you expect from a Cukor film than a witty script, and light and enjoyable roles for great actors?

Saying Dinner at Eight is one of Cukor's best is a bit of an understatement. Okay, it's not the best but it's still great. A nice blend of comedy and drama is something everyone needs, and here it is in film form.