Stranger by the Lake 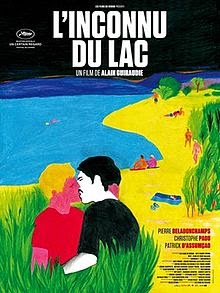 We all deserve a good thriller every now and again. After all, who doesn't enjoy a bit of a scare once in a while? But what Hollywood has to offer sometimes isn't satisfying enough so what is one to do? Simple: see what the rest of the world has to offer.

Alain Guiraudie's Stranger by the Lake is a thriller that you certainly couldn't make easily by many means. (And not just because of its characters and setting.) It's a daring film to say the least.

But what is it about Stranger by the Lake that makes it so daring? Well, the rather...graphic nature of it. And it's not violence that's being referred to. Honestly, those scenes make In the Realm of the Senses look like In the Mood for Love. (Then again, this is a French film.)

That said, there's more to Stranger by the Lake than just explicit sex scenes. It's also one of the latest films to depict that there's more to people than meets the eye. After all, do you really know the people you meet?

Stranger by the Lake is very good but the sex scenes do take away from the film. That said, Guiraudie has made a film that would make Hitchcock proud. Alas, like Blue is the Warmest Color, sometimes explicit sex scenes don't always add to the story. (At least with Blue is the Warmest Color's first one it was relevant. The other ones, not so much.)

My Rating: ****1/2
Posted by MovieNut14 at 10:21:00 AM
Email ThisBlogThis!Share to TwitterShare to FacebookShare to Pinterest
Labels: 2010s, movies, reviews