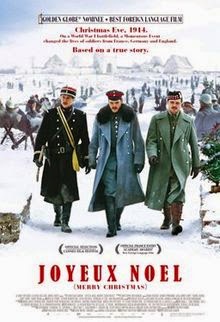 World War One. The war to (supposedly) end all wars. So much brutality in four long years. But even amid all of the unspeakable horrors from the fighting, there were times of humanity.

Such was the case of the 1914 Christmas truce as dramatized in Christian Carion's Joyeux Noel. This is a film that highlights kindness beneath the violence, something not often seen in war films. (The Pianist is another good example.)

Even though it's a French production, the film focuses on three different regiments of various armies: Scottish, French and German. It's this detail that adds to the film's nature. Even if they don't share a common language, they do maintain a certain level of civility when they interact.

As with other war films like The Thin Red Line, Joyeux Noel focuses more on the soldiers than the battles. To some, it might take away from the blood and carnage they'd usually expect from a war film. But with Carion's hand, it's something beautiful.

Joyeux Noel is a very lovely film. It's a quiet film certainly, but it's also a film that embraces the kindness of human nature. It's something most war films tend to eschew but Joyeux Noel does it beautifully.

My Rating: *****
Posted by MovieNut14 at 10:50:00 AM
Email ThisBlogThis!Share to TwitterShare to FacebookShare to Pinterest
Labels: 2000s, movies, reviews