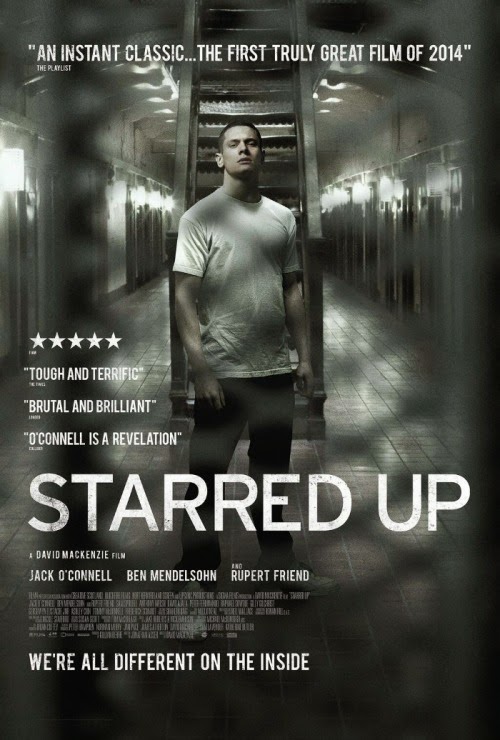 The opening moments of David Mackenzie's Starred Up show Eric Love (Jack O'Connell) as he's led into prison. On first impression, he doesn't seem too bothered by his current situation. It doesn't take long to see why he's in jail. (Of course there's a reason behind that.)

Like other British prison dramas such as Bronson and Hunger, Starred Up focuses on the dehumanizing nature of life behind bars. The main similarity between these three films is they don't sugarcoat things. They want it to be brutal and unflinching.

What's also worth mentioning is how O'Connell shows what Eric's thinking without saying anything. His eyes are almost always looking at the floor. (The few times he does look up it's always with a glare.) It's a small detail but it's something that adds to the performance.

But it's not just O'Connell's show. Also standing their own in Starred Up are Ben Mendelsohn and Rupert Friend. Both of their roles have them trying to help Eric while he's behind bars. But their efforts may be proven fruitless.

Starred Up has some flaws but the work from O'Connell manages to make up for them. It's clear that O'Connell will become a prominent name thanks to this film. Here's hoping that will actually happen.

My Rating: ****1/2
Posted by MovieNut14 at 11:22:00 AM
Email ThisBlogThis!Share to TwitterShare to FacebookShare to Pinterest
Labels: 2010s, movies, reviews