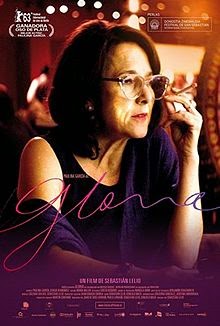 The opening shot of Sebastian Leilo's Gloria focuses on an older woman as she stands by the bar alone. This woman is our protagonist Gloria (Paulina Garcia). The story about to be told has been told before but rarely from the perspective of an older woman.

A lot of films of this nature are, as mentioned above, focused on women of a certain age. (Or, in other words, mid to late 30s.) The few films that do focus on older women and their romantic lives (Enough Said being a good recent example) are willing to focus on the other aspects of their lives as well.

What Gloria also features is something not frequently depicted is a woman with an active sex life. Usually such behavior is reserved for men because they're supposed to sleep around. But women? Don't even think about it. Thank Leilo for the contrary.

And it's thanks to Garcia's performance that makes Gloria work. She plays Gloria as a woman who doesn't let her age get the better of her, which again is a rarity amongst female roles. It's quiet by many means but it's a performance worth seeing.

Gloria is a really charming film, thanks mainly to Garcia's performance. It's a film that shines a light on a very underseen subject: life after mid-life.

My Rating: ****1/2
Posted by MovieNut14 at 11:12:00 AM
Email ThisBlogThis!Share to TwitterShare to FacebookShare to Pinterest
Labels: 2010s, director: Sebastián Lelio, movies, reviews