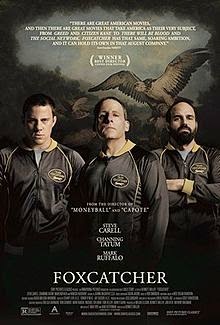 Bennett Miller's Foxcatcher that focuses on three men, all of whom are driven by different goals. And like what Miller did with his last two films Capote and Moneyball, he enlisted choice actors for the roles. Those actors are Steve Carell, Channing Tatum and Mark Ruffalo.

In a stunning departure from his comedic roles, Carell delves into a dark role that's truly chilling. It's clear in some scenes that something isn't right with him, but what? Here's hoping Carell gets more roles like this.

Much like what Carell does, Tatum proves he can be a bonafide actor. It's a role that requires physical and emotional endurance, and Tatum is more than capable of it. Again, here's hoping that Tatum gets more roles like this.

In contrast to his co-star's performances, Ruffalo gives a quieter turn. He gives a performance that has him witnessing all of the silent chaos unfolding. It's only a matter of time before the unthinkable happens.

Foxcatcher is very good though its slow burn might be too slow for some. Still, as is the case with Miller's films, the performances are great. Sometimes you don't know what a person is capable of, whether they're a sinner or a saint.

My Rating: ****1/2
Posted by MovieNut14 at 10:58:00 AM
Email ThisBlogThis!Share to TwitterShare to FacebookShare to Pinterest
Labels: 2010s, director: Bennett Miller, movies, reviews