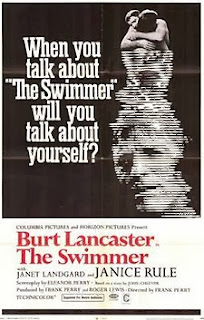 Frank Perry's The Swimmer is certainly not one of the more conventional films of the 1960s. (Or, for that matter, any decade.) It doesn't open (or end) on a standard Hollywood note, and yet it's a bizarrely transfixing film.

It's understandable to see why The Swimmer is not that well-known of a film. After all, it was released in the year of 2001: A Space Odyssey, Bullitt and Rosemary's Baby. So that could mostly contribute to its obscurity. (Then again, there are a number of other less-than-famous films from that year.)

The story is also an unconventional one. Many films from this era would focus on a character trying to achieve the American dream. Here in The Swimmer, it's a complete deconstruction. Once one gets that dream, it can be hard to maintain it for those around you.

And I can't go on with this review without talking about Burt Lancaster's performance. Lancaster was one of those actors who was always good regardless of the film, and The Swimmer is no exception. With his quiet musings on life throughout the film, Lancaster's work in The Swimmer could easily rank as one of his best.

The Swimmer as a whole feels clunky in spots but is overall a solid piece of filmmaking. Perry, better known for the infamous Mommie Dearest, gives his audience an allegorial curio of a film that simply floats around in your mind long after the credits have rolled.

My Rating: ****1/2
Posted by MovieNut14 at 11:28:00 PM
Email ThisBlogThis!Share to TwitterShare to FacebookShare to Pinterest
Labels: 1960s, movies, reviews