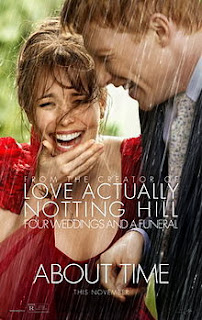 A few days ago, Richard Curtis' Love Actually celebrated the tenth anniversary of its release. For those who haven't seen it yet (which is practically impossible by now), it's a multi-linking film about (quite simply) love. Many people have since fallen in love with it.

Curtis' new film About Time will probably have the same effect Love Actually had on its audiences a decade ago. (It certainly did for me.) Yes, there are themes of love throughout the film, but it all results into a film about life.

Admittedly, I liked About Time more than Love Actually. Why? Because there were several scenes that were very relateable to me, mainly those near the end. (It came as no surprise that they hit me in the right spot too.) When a film does that, I'm bound to love it.

I also liked the overall message of the film: appreciate the small things in life because they'll be gone before you even realize it. It also reminded me of a quote from the Curtis-penned Doctor Who episode "Vincent and the Doctor" (which is also one of my favorite episodes of the show): "The way I see it, every life is a pile of good things and bad things. The good things don't soften the bad things, but vice versa, the bad things don't necessarily spoil the good things or make them unimportant."

Long story short, About Time is a ridiculously charming film. It has the right balance of comedy and drama that's practically essential for any piece of fiction. When you have the chance, be sure to see this. (Preferably with someone you care about.)