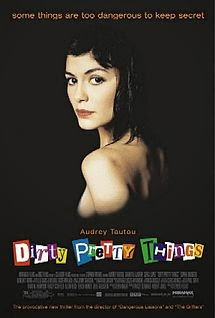 Early on in Stephen Frears' Dirty Pretty Things, it's established that Okwe (Chiwetel Ejiofor) isn't content with the life he's living. He studied to be a doctor but is currently working as a cab driver and a hotel receptionist. He's also an illegal immigrant from Nigeria living in London, so he has to keep his eyes open constantly.

Senay (Audrey Tatou) isn't exactly better off. She works at the same hotel as Okwe but she longs to live in New York City. And like Okwe, Senay is also an immigrant to London. (She's from Turkey.) But her hopes of going to the United States are appearing to become dashed because of the horrors she faces in London.

The performances Frears get out of Ejiofor and Tatou are quite mesmerizing. Take everything you know and love about Tatou in Amelie and throw them out the window. She's not a shy, lovelorn Frenchwoman here. She is instead a woman scared of the world she's a part of. It simply must be seen.

And even though Tatou got top billing (and her face on the poster), it's Ejiofor who's the star of Dirty Pretty Things. Like with many of his other roles, Ejiofor draws you in from the very moment he appears. (Not that many actors have that kind of charisma.) Again, it simply must be seen.

Although it's not the strongest of Frears' films, Dirty Pretty Things is still quite good. Thanks to the work from Ejiofor and Tatou (as well as a scene-stealing Sophie Okenedo), the film shows that the life you're living can become a dangerous one before you know it.