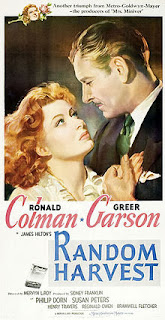 I usually don't care much for love stories. (I'm a cynic, so sue me.) If I do decide to watch one, it's usually one that's either doomed from the start or on its last legs. The best ones, however, are those that appear perfect but are anything but.

That can describe the relationship between Paula (Greer Garson) and "Smithy" (Ronald Colman) in Mervyn LeRoy's Random Harvest. Yes, they meet, fall in love and get married, but neither know of Smithy's past prior to their meeting. Then Smithy remembers who he is...but forgets his life with Paula.

Much like LeRoy's earlier film Waterloo Bridge, Random Harvest spends the first third revolving around the budding romance, the second third on their separation, and the final third on their possible reconciliation. (The endings for both films, however, are very different.) Even then the stories between the lovers bear striking resemblances.

And to make the story more potent, LeRoy enlisted the likes of Garson and Colman. Garson has a number of heartbreaking expressions throughout the final third which make the film have more of an impact. Colman in turn has a vulnerable look in his eyes that makes his work in the first third more lasting. The combination of these two looks during the final moments all the more enduring.

Random Harvest is a very lovely film. Thanks to the work from LeRoy, Garson and Colman, the film takes a simple plot (which in the wrong hands would be a melodramatic mess) and makes Random Harvest a romance for the ages.