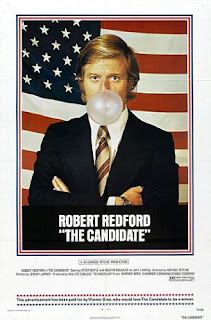 There's no denying that this current election has been all sorts of insane. Honestly, it's a race between someone who has a background in politics and someone whose rise to infamy started with some good ol' nepotism. But would you believe that a satire from over forty years ago practically predicted all of this?

That satire, by the way, is Michael Ritchie's The Candidate. (Worth mentioning that its writer Jeremy Larner is still around to witness democracy fall to pieces.) And bear in mind the same year this was released, Watergate happened.

What makes The Candidate work is that Larner (who justly won an Oscar for the script) knows what he's writing about. (He started as speechwriter when Eugene McCarthy ran for office in 1968.) Larner imbues moments from the real-life campaign trail he was a part of to the fictional one he penned. And yes, it's just as chaotic as it sounds.

Indeed there have been more convoluted presidential races before this current one but it's what shown in The Candidate that makes the election so damn eerie. Again, it involves someone with little to no political knowledge up against someone who's been in politics for years, and they have a chance at winning. (If that's not frightening, nothing is.)

Yes, it's a satire through and through but The Candidate is nowadays ominous. The fact that several politicians have cited it as an influence says everything right there. (And if that closing line isn't on a certain level of prophecy, again nothing is.)

My Rating: ****1/2
Posted by MovieNut14 at 11:45:00 AM
Email ThisBlogThis!Share to TwitterShare to FacebookShare to Pinterest
Labels: 1970s, movies, reviews