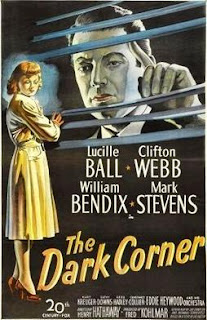 Henry Hathaway's The Dark Corner seems to follow the familiar elements of film noir: lead character trying to escape criminal past, supporting characters with deceptive natures, things of that sort. But how does it weigh in with the greats of the genre?

The Dark Corner wasn't Hathaway's lone venture into film noir. (He would later go on to make the likes of Kiss of Death and Niagara.) As he shows here, he utilizes noir elements like shadows and backstabbing. But how well does he do it.

Admittedly Mark Stevens as the male lead feels somewhat off, lacking the charisma so needed for a genre like film noir. (Perhaps someone like Robert Mitchum would've been a better choice.) But having film noir regular Clifton Webb among the cast makes up for it somewhat. (As does having Lucille Ball as the leading lady.)

In a time where returning soldiers felt disillusioned by the world that physically and mentally destroyed them, they sought out those who shared the same jaded perspective as them. And The Dark Corner provided such a temporary sanctuary for these broken men. They saw an escape from a world not knowing how to heal them,

The Dark Corner isn't among the greats of the genre but it is good. Yes, Hathaway would hit his stride more with his later noirs but he did show his audiences what to expect from future titles. (And to be fair, there was a lot of noir being churned out that year.)

My Rating: ****
Posted by MovieNut14 at 4:47:00 PM
Email ThisBlogThis!Share to TwitterShare to FacebookShare to Pinterest
Labels: 1940s, movies, reviews