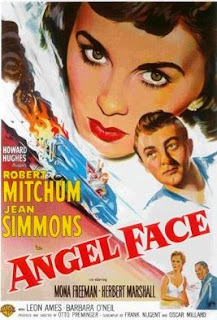 After years of being under the thumb of the studio system, you could tell in some of his films that Otto Preminger wanted to break free. Indeed in the years to come he would regularly push the envelope with what the Hays Code would allow. But his films under the system don't become irrelevant, not in the least.

One such title from that time was Angel Face. Though not as well-known as Preminger's other famed noir Laura, it's still proof that noir was where he was his best. After all, he seemed to better grasp the psychology aspect of the genre.

Like Laura, Angel Face explores obsession but this one shows a more unhealthy depiction of it. When we first meet Diane Tremayne (Jean Simmons), it's clear that there's something off about her. And as Frank Jessup (Robert Mitchum) learns the hard way, it's best if one doesn't get close to her.

Of course having Mitchum is film noir is practically to be expected but it's Simmons who's an inspired bit of casting. No longer is she the proper English lady she played time and time again throughout her career. If only Hollywood gave her a chance by letting her play the femme fatale more often.

Angel Face is proof that Preminger was the premier back then for dark material. (He most definitely didn't give a damn what censors thought of his work; he wanted to shock his audience in a way different from Hitchcock.) He may be a mostly forgotten name nowadays but when you see a film by Preminger, it's very seldom one that'll be forgotten easily.

My Rating: ****
Posted by MovieNut14 at 11:49:00 AM
Email ThisBlogThis!Share to TwitterShare to FacebookShare to Pinterest
Labels: 1950s, director: Otto Preminger, movies, reviews