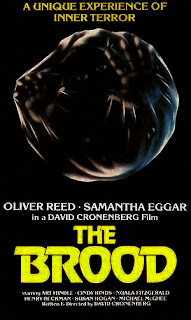 Sometimes a work comes to fruition because of what happened in the creator's life. The output of most James Ellroy's career was provoked by his mother's unsolved murder. Charlotte Brontë's novels Shirley and Vilette were written as her siblings fell ill and died. Basically if something bleak happens, it'll be integrated in what they're making.

David Cronenberg's The Brood came about following a messy divorce and custody dispute. He would claim it was his most personal film: "The Brood is my version of Kramer vs. Kramer, but more realistic." (Coincidentally, both films were released the same year.) In comparison with Robert Benton's Best Picture winner, Cronenberg doesn't shy away from the ugliness of divorce. (Hey, write what you know.)

Back in 1979, The Brood was viewed as nothing more than exploitation-filled schlock. But all these years later (and with more films under Cronenberg's belt), it's far more than that. It began to set the mold for the Canadian director's later work and how he awakened a morbid sense of creativity within himself and Hollywood.

Similarly, The Brood shows a contrast between the two stages of Cronenberg's career. His more recent films maintain a sense of realism while his earlier work prefers surrealism. But there's one connecting factor between those two stages: the terrors of what should be keeping us safe.

The Brood depicts the horrors often found (and sometimes ignored) within everyday life. Those we're supposed to trust no matter what are those who inflict the most harm. After all, sometimes the real monsters are those who look completely harmless.