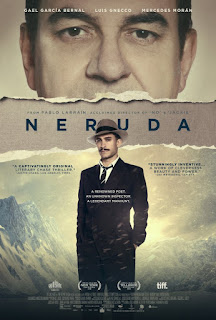 Where does the line between fiction and reality start to blur? At what point does that become acceptable? And, more specifically, when can it be used for storytelling?

Pablo Larraín's Neruda answers the latter question with some playful twists and turns. One would assume the film would be focusing on the Pablo Neruda (Luis Gnecco), the famed poet on the run from prosecution  for his involvement in the Communist Party. Instead, much of its focus is on Oscar Peluchoneau (Gael García Bernal), the police officer on Neruda's trail.

What Larraín shows with Neruda is a difference between how the two men live their lives. The poet (almost unsurprisingly) leads a life of alcohol-fueled soirees and prostitutes while the police officer has a more straight-laced existence. Naturally this distinction between private and personal lives is a common aspect throughout fiction but there's a notion of envy in this as well.

And it's the two lead performances of Neruda that make the film work. Between Gnecco's flamboyance and Bernal's stoicism, Larraín shows how both men handle life and its many changing elements. But at the same time, Larraín finds a similarity within these men.

Neruda has an unconventional way of storytelling, yes, but that's one of its charms. As he also did with Jackie, Larraín takes the expectations of an oft-attempted genre and turns it on its head. Here's hoping Larraín's career will be a successful one.

My Rating: ****1/2
Posted by MovieNut14 at 11:06:00 AM
Email ThisBlogThis!Share to TwitterShare to FacebookShare to Pinterest
Labels: 2010s, director: Pablo Larraín, movies, reviews