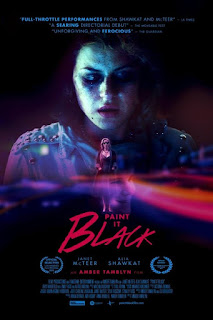 Amber Tamblyn's Paint It Black shows much ambition in the first-time director. This having been a work in progress for the last few years, she wanted every detail to be precise. But does it pay off in the long run?

Based on the book by Janet Fitch, Paint It Black follows Josie (Alia Shawkat) in the aftermath of her boyfriend's suicide. Amid the nights of heavy drinking, she tries to make peace with his mother Meredith (Janet McTeer). But it's a task easier said than done.

With Tamblyn being a product of Hollywood, Paint It Black has its fair share of influences. The relationship between Josie and Meredith bears resemblance to Persona. The decaying mansion Meredith lives in hearkens back to the likes of Sunset Boulevard and The Haunting (which co-starred Tamblyn's father Russ). And the soundtrack borrows cues from synthesizer-scored films like Legend and Labyrinth.

Despite their initial differences (and their stormy first encounter shown in the film), there's a strange sort of connection between Josie and Meredith. Both lead self-destructive lifestyles behind closed doors. And when both trying to make sense of their loss, they try to peace together the past, trying to find if there was any warning of what would happen. (Again, grief is a complicated thing.)

Paint It Black shows immense potential with Tamblyn as a director. Gone is one of the stars of The Sisterhood of the Traveling Pants movies, now we have a very promising filmmaker. Hopefully her debut won't be Tamblyn's lone foray as a director.

My Rating: ****1/2
Posted by MovieNut14 at 8:45:00 AM
Email ThisBlogThis!Share to TwitterShare to FacebookShare to Pinterest
Labels: 2010s, directed by women, movies, reviews